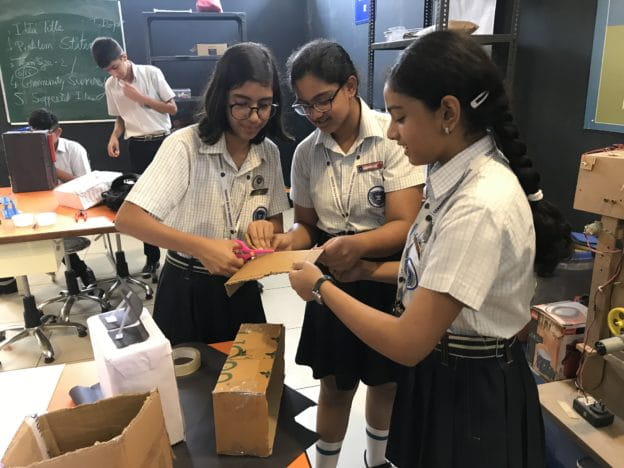 Be it history or looking ahead in technological advance, the love of science is something that should be embraced by all. It is very important for the students to explore and engage in enquiry based learning. Such exhibitions provide a platform whereby students indulge in hands on activities and project making. This surely nurtures their inquisitive minds and unleashes creativity.

“Atal Tinker Fest” was organised for the students of classes VI-X on 19th and 20th July 2019. This  was an encouragement for the young minds to give out-of-box solutions in the form of prototypes for business feasibility. The event was judged by social Entrepreneur Mr. Tripatpal Singh, Social Worker Puneet Malhotra and Principal Ms. Nutan Budhiraja.

With the thought, ‘The science of today is technology of tomorrow,’ Edward Teller. The event started on 19th July,Participants were divided into two groups VI-VII and VIII – X.  where students had the battle of gray matter. They developed the prototype of the idea they had. Second day, there was presentation of the prototypes accompanied with a business plan. There was an overwhelming response from both the grades.

Both the days’ witnessed creativity exploding in every piece of scientific work. The competition not only served its sole purpose, but also gave us a platform to display vivid ideas. Students also learnt more as they worked in a team & each one of them contributed his best. It also enhanced awareness amongst students so that their compatibility factor with nature itself becomes their motto in life.  Young scientists of school prepared beautiful models using their innovative ideas on Water Conservation Health, Safety and sustainable management of resources. Winners were awarded and recognized for their efforts.