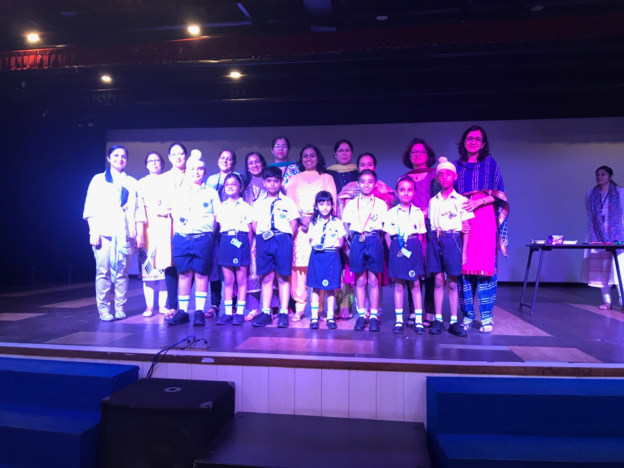 INTER HOUSE BEST OUT OF WASTE (Group B)

Inter House ‘Best Out Of Waste’ competition was held on May 14, 2019 for classes IV and V. The core concept of the competition was to arouse awareness among children about the importance of resources available in their environment and how to reuse and recycle them for their optimum utilization.

The theme of the event was ‘Aesthetic Presentation’ of the waste material from day to day life. Hundred percent participation was ensured during this event. Each house was divided into six groups for classes IV and V respectively by the house teachers. Students had brought material from home and showcased their products. They turned up with surprising ideas and gave each other a tough competition. They were given 40 minutes to complete their product. The competition was judged on the basis of presentation, creativity and originality. Mr. Purvaj and Ms. Gauri were the judges.

Three groups from each class were awarded for their presentation. Agni House bagged the first position, Prithvi House got second and Jal House stood third in the competition.

An Inter House Graffiti Making competition was conducted at Learning Paths School on 18th April, 2019.  The students participated with great enthusiasm. An Intra test was conducted by the art department to pick  the talented students to compete in the final round. The theme of the competition was the time appropriate- Elections. The houses had two teams each comprising of two students. The competition aimed at encouraging students to display their creative acumen. A team of subject experts Mr. Purwaj Bhardwaj, Ms. Deepa Seth and Ms. Nisha judged the competition. The students’ creativity was then exhibited in the school premises. The winning house was Prithvi House followed by Aakash House. The third position was bagged by Jal House followed by Agni House.

On World Book Day, the students of Class-I participated in the Bookmark Making Competition. The theme for this competition was ‘Earth Day.’ The children participated enthusiastically and displayed their creative abilities through art. They spread a powerful and inspiring message to nurture and protect our Earth. Overall, it was an enjoyable experience for all the little ones.

An Inter House English Extempore Competition was held for classes VIII – X. The topics were related to the children and their issues, some of them were related to current affairs. The children were given 2 mins to prepare on the topic which they chose for themselves and they had to speak for 4mins. The children spoke very well and mesmerized the audience with their speeches. They were adjudged on the following parameters Content, Presentation, Pronunciation and Intonation. It was a tough competition.  Meenal Singh Class XC bagged the first position. Navnoor Rana Class VIII C got the second position. Vrinda Chopra Class XB stood third.

The Inter House English Story Telling Competition for Group-A Classes II and III, was held on 30.04.19. The students were to narrate a story with a moral for 2 to 3 minutes. Ms. Gauri and Ms. Mansha presided as the judges for the competition. The students narrated wonderful stories in English and gave the judges a tough time.

The overall House positions were as follows:

Inter House ‘Just –A- Minute’ competition was held on the 16th of April, 2019 for the students of classes IV and V. The students had to display their extempore speaking skills on a given topic within a span of a minute.  It was an effort to assess the students’ confidence and spontaneity to speak in the English language.  The participants impressed the audience with their performance by exhibiting good speaking skills. Jal House was the winner of the event, while Agni House and Prithvi House secured Second and Third Position.